How to locate a failure

This guide will help you find the reason your tablet doesn’t work under Linux and who can help you fix it. You’ll need to know how to minimally use Linux command line. This guide won’t hold your hand and will expect you to find some things out by yourself. We’ll start from the bottom.

As unlikely as it sounds, it sometimes happens, and might be good to rule out. Sometimes the USB host hardware in computers is faulty and your tablet might experience intermittent disconnects or similar transient issues. To make sure that is not the case, try the tablet on another machine, preferably a different model or make, but with the same operating system. If it works there, then the computer hardware is likely at fault and you need to repair or replace it. Proceed to the next section if it still doesn’t work.

Don’t be worried if you can’t do this test. Such failures are rare and I think I only saw them twice through all the history of the project.

Next thing you should do is check if your tablet works under Windows. If you installed the required Windows drivers correctly and it still doesn’t work, then that’s likely a hardware issue. To be extra sure try it on yet another Windows machine, preferably with another Windows version.

If you don’t have a Windows machine handy, but have an install disc or image, and an appropriate license, you can run it in a virtual machine under VirtualBox, Virt-Manager or similar, install the drivers, connect the tablet from the host system using VM configuration, and test it.

If you have none of the above, then you can use your Linux system to talk to the tablet directly and try to figure out if what it says makes sense.

First, find out the vendor and product IDs of your tablet, commonly abbreviated to VID and PID, and represented as a pair of 4-digit hexadecimal numbers with a colon in between. You can see each tablet having them on our tablets page. For example, KYE EasyPen i405X has VID:PID of 0458:5010, but e.g. most Huion tablets share the same VID:PID of 256c:006e (in abuse of the USB standard).

To find the VID:PID of your tablet, simply disconnect it from your computer, run lsusb, connect it again, run lsusb again, and then compare the outputs and find the line which appeared in the second output - that’s your tablet.

In the example above, the new line corresponding to the tablet is:

It describes a Huion tablet. Note how there’s nothing after the VID:PID (256c:006e). This is an extreme, but possible case, where the tablet doesn’t report actual vendor or product name, which would have helped to identify it. That’s why the ultimate method of finding your tablet in lsusb output is comparing two outputs before and after plugging the tablet in.

Once you start the command, it will begin listening to your tablet and outputting the data it receives:

The above is a very short excerpt of reports sent by a Huion Tablet in response to its pen hovering above the drawing surface. Once you’re done looking at the reports, press Ctrl-C to terminate usbhid-dump.

Deciphering everything the tablet sends can be hard and it isn’t really necessary to find out if the tablet hardware works in general. Usually it is sufficient to simply see if the tablet reports change in response to the kind of input that you see not working. Remember also that numbers in the reports are in little-endian format, e.g. the least significant byte comes first (leftmost), followed by more significant bytes. So, a 32-bit hexadecimal number 1234ABCD will be output as CD AB 34 12.

For the most frequent complaint of pressure detection not working, try holding your pen still, increase and reduce pressure on the tip repeatedly, and see if the reports change in sync with that. You should see some bytes in the reports go up as you increase the pressure:

And go down as you decrease it:

Note also that with any pen input it is very hard to keep the pen completely still and so reported pen coordinates will almost always change with anything else you’re trying to do, such as varying the pressure. Can you see the pressure changing in the reports above? Try finding it.

Yes, it is the last two bytes. In most cases this is where the pressure is. In some very rare cases, where the tablet actually supports reporting tilt angles (I only ever saw one such non-Wacom tablet), they will follow pressure.

Don’t be discouraged if you don’t see the tablet responding to the input you’re trying to make. It can still be the case, that Linux simply doesn’t initialize tablet properly and it doesn’t e.g. report pressure, or clicks on the buttons around the drawing area. To rule that out you will have to test with Windows.

If you’re sure Linux supports your tablet and you still don’t see the reaction to the input, or it doesn’t work on Windows despite your best efforts, then your tablet hardware is likely at fault and you’ll need to send it for repair or replacement. Otherwise, proceed to the next section.

The kernel drivers can be buggy, or simply don’t know about your tablet. To see if that’s the case, we can look at the kernel debug interfaces under /sys/kernel/debug/hid.

Then go to /sys/kernel/debug/hid directory:

You will likely see a couple directories. Each HID interface on a USB device will have a separate directory:

In the example above the first directory belongs to a USB mouse, and the other three belong to a Huion H610 tablet. Each of the directories contains two files, rdesc and events:

These are not regular files, but instead contain data generated by the kernel as you read them. The rdesc file will contain the interface HID report descriptor and its interpretation by the kernel, which is useful, but is hard to interpret, and we’d better focus on the events file.

When you read the events file, the kernel will be outputting the stream of input reports it reads from the device and how it interpreted them, without end. However, this is done only if something actually reads from the corresponding device. If you have no user-space drivers handling this device, you might as well see nothing in events file. In that case, running evtest on the corresponding event device (see below), will fix it.

As before, you might need to try reading the events file for each device and do some input to find the device directory you need. That, or look at and interpret the contents of the corresponding rdesc file. Here is an example output for the pen interface of the same Huion H610:

The above is truncated to just three reports, you will get much more than that with a pen interface of your tablet.

Another approach is to see what the tablet looks like through the evdev interface, which userspace drivers use. Make sure you have the evtest package installed, and then run the evtest tool:

It will present you with the choice of devices to test. Something like this:

Your tablet can be represented by several devices: one for pen input, another for frame buttons, a third one for the mouse, if it has one, and so on. In the output above the tablet interfaces are listed last and are clearly labeled, thanks to the work of Benjamin Tissoires on the UC-Logic driver. Other tablets might not be so well catered-for, so you might need to figure out which one is which and select appropriately. Otherwise you can simply try them one-by-one until you find the one that produces output when you do the kind of input you’re trying to troubleshoot.

Enter the device number and you will be presented with a list of events and value ranges the corresponding interface can report, followed by endless output of events the kernel reports. Example for Huion H610 pen interface:

As mention before, pen interfaces produce a lot of events, and the above is just a short snippet.

If you think the output you see is wrong, report your problem to the bug tracker of your Linux distribution. If that fails, report it to the kernel bugtracker at https://bugzilla.kernel.org/.

If the output looks right to you, move on to the next section.

If you use the still most popular X.org display server, you’re likely using either xf86-input-evdev or the newer xf86-input-libinput drivers. You can also be using the xf86-input-wacom driver, but only if you set it up yourself, in which case you would know. Unfortunately, I cannot help you if you use Mir or Wayland, as I haven’t used them myself yet. Refer to their documentation and support forum.

To test the X.org drivers you will need the xinput tool, usually available in the package by the same name. First, find out your device name. Run xinput list to see all devices. They will look similar to what you get from the evdev output and you can use the same approach to find the one you need: read the device names, and if several look like what you need, try them one by one by supplying their name or IDs to xinput test command, and then doing the appropriate input until it produces output.

Here is an example for Huion H610:

Look at the output and try to figure out if it makes sense. If something looks not right, like wrong axes reported for pen movement, or wrong scan codes reported for button presses, then report your problem at bugtracker of your Linux distribution (you know where to find it, right?). If that fails, report your problem at https://bugs.freedesktop.org/

If everything looks right, move on to the next section.

If you see problems with your tablet in all applications you try, then you need to check previous sections. Otherwise, make sure your application is configured correctly. Although not strictly necessary, many applications provide interface for configuring tablet usage and sometimes that needs adjusting. Look at the corresponding application configuration and documentation and check our (now rather outdated, but still useful) application setup HOWTOs. 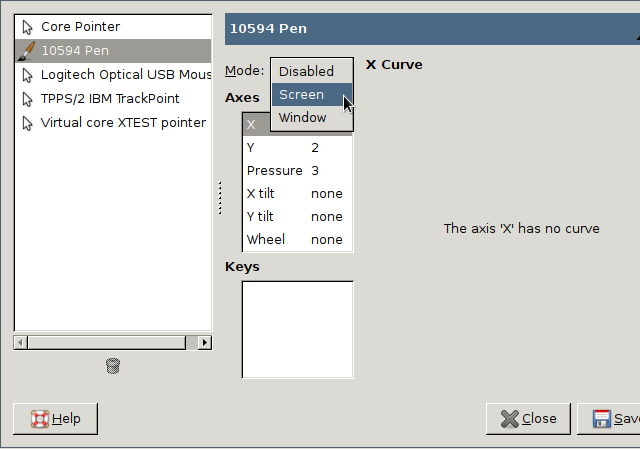 Some applications even provide a way to test the way they understand your tablet, such as MyPaint. That can help you.

If you still can’t figure it out, check if you only get problems in applications using the same toolkit, i.e. GTK or Qt. Both of them had issues with tablet support in the past and that can happen again, especially since most people test with Wacom tablets only. If you can confirm that, report the issue with the corresponding toolkit to your Linux distribution bug tracker, or if that fails, to the bug tracker of the specific toolkit.